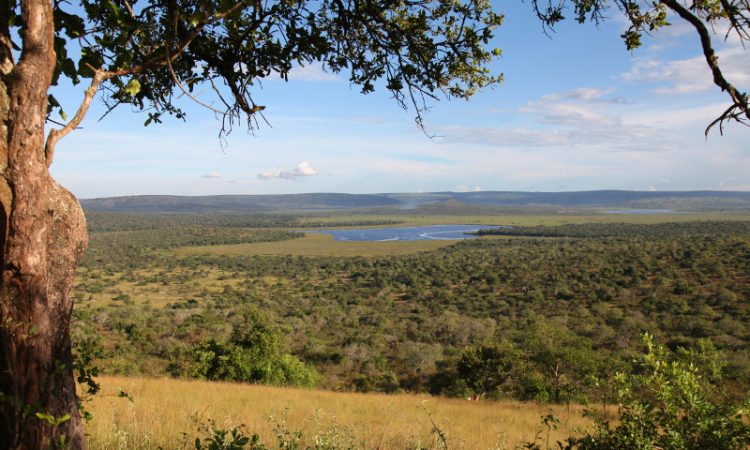 Location of Lake Mburo National Park is conveniently place close to the highway that connects Kampala to the parks of western Uganda.

The major transport means one can use to come to the park are by road and it is approximately 228 kilometers from Kampala to the park but this journey has got one of the best stop overs that can keep his or her mind busy, active and forget about the long distance journey. It’s also known as one of the stopovers that can make the eyes and mind of the visitors eager to know what the park holds for them.  This stop over at Mpambire trading where different drum makers are found and the equator at kayabwe.

Lake Mburo national park lies on the precious rock or gem and its pre-cambrian rocks underline lake mburo area with rocks comprising a mixture of Cenozoic. The area contains high granitized rocks, argillite rocks predominate the area but more there more arenite and silty rocks that are distributed all over the area, the park has ferralitic soils that are mainly Sandy loam and Sandy clay and these have enabled the growth of different plants and trees thus making the place colorful with green and the environment conserved.

The location of Lake mburo national park lies in the rain shadow area and that’s between the gorgeous Lake Victoria and mountain Ruwenzori and this area probably has two seasons and these are the rain and dry seasons, and in this the park receives a big modal low rainfall ranging between  500 and 1000 mm causing a temperature variation to be between 23 to 25 degrees Celsius so one so also put in program the climate changes of the park and comes when he or she is prepared.

Lake mburo national park has got only two precious park entrances and these include Sanga and Nshara but the money collected from both entrances, 20% of it I used to fund the community by building schools and clinics.

The distance from each gate to rwonyo is about 2 kilometers where the headquarters are found and it’s a 20 minutes drive. Per now at Lake mburo national park there no schedule for domestic flights but one can organize a private flight that can lead them to the park. For such a person it will require him to go start the from Entebbe airport which 46 kilometers from the beautiful capital city of Uganda and that’s Kampala but he or she should keep in mind that early arrival at the park is necessary because as always the saying say time is money. This has made the park one the best because of its strong commitment to protect and preserve wildlife in Uganda.

The location of Lake mburo national park is strategically placed in one of the best districts in Uganda and that is mbarara district. Since it’s in such a district the park is easily accessed and has a good climate that favors animals to leave well and the tourists coming in without being affected by the temperature changes in the park .

There very many ways of getting to the park, since the park is located in the western part of Uganda. So as one is coming from Kampala there is a sign post at a distance of 221 kilometers pointing to the left therefore you are required to make a left turn that will lead you to the entrance of the park . . This direction will lead you through the Niagara gate. If your from mbarara it’s just got 47 kilometers to the head quarters. At Sanga you just make a right turn then the rweshsheshebe park gate is 12 kilometers therefore  it’s advisable to take a four wheel drive car due to the rapidly changing climate at the park, especially during the rainy seasons. At sanga one is advised to take a small bus but still the transport leading to the gate is limited so one must wait for some time until he or she gets the right transport means to complete his destination to the wonderful national park that is filled with great and mighty things ready to explore and discover.

Lake mburo national park is the only national park with a whole lake in it, making it unique and putting aside the issues of its size. Since the park is special it has a range of beautiful landscapes and wild animals that are found in the park, it’s known as the only national park park in Uganda with impala. The park also keeps giraffes but not in big numbers like other parks. It has got a range of predators and these include the leopards and side striped jackal,  white mongoose. But also many activities are Carried out in the  park which includes walk safari, horse riding, Bird watching. The park is also covered with shrubs, forests, wetlands and they almost take 20% of the park and in them great papyrus grows from them. The beautiful  part of all the park is surrounded with raising and falling hills an addition to the sceneries in Lake Mburo National park.

The forest and the Savannah birds flying in the air are viewed only in boat cruise, but some of the are aquatic birds and accusing birds and Savannah for example crested crane, bronze tailed starling, woodpeckers and many more.These also make more people to come to the park .

Lake mburo national park is one of the three parks with burchell’s zebra. The nature always creates a difference and as such it made lake mburo unique and different forgetting its size. Since the area is covered with Savannah grassland and acacia trees and it’s neighbored with Cyprus, papyrus and these are sanctuary to the papyrus Gonolek. Maps show that the park is so close to the capital city of Uganda and it only takes a simple drive to reach the beautiful land of lake mburo national park.