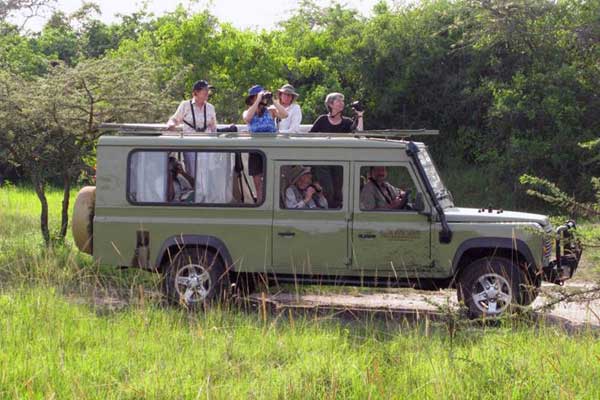 Game drives in Lake mburo national park came up as a result of the park being strategically located in a wonderful district of mbarara that has got a favorable range of climate. These conditions can enable the game activities to take place and it having great features and landscapes such as the rocky plains, the forested gorges, shrubs, thicket, the 14 lakes of which 5 of them are within the boundaries but above all having lake mburo as the largest,  but also the unique wild animals found in this place have played a big part for the game drives to take place for example the nice looking impalas.

Game drives in Lake mburo national park are well scheduled because some animals are too shy in that they can’t be seen any time one wants to. So these game drives were put in place because of that and therefore it’s advisable for one to be available either very early in the morning or late afternoon because those are the best times to roam the park in search for hidden treasures of the wildlife in Lake mburo national park. The Eastern part of the park posses a variety of landscapes features including the acacia woodland, wetlands, grassy hillside, rock out crops, and seasonally flooded valley floors. All these have imposed  a force for the game drives to take place such the visitors get close to the nature of this great park.

Game drives in Lake mburo national park take place but they are well organized and programed according to the climate changes of the park. But also according to day or night, in that a night drive was put in place to those that missed the day activity . This night drive is programed to start at around 6:30 up to around 7:00. The last two and three hours of the drive are lead and managed by profession ranger guides and in the course of this there high chances of seeing nocturnal animals. For example the bush baby, perhaps even leopards. The nocturnal game drive is one of the memorable drives in the park and there are high chances of spotting different types of animals for example zebra, impala, warthog, Waterbuck,  and large herds of over 100 eland. But these are quite shy and recently lake mburo national park has just introduced giraffes which has been a great achievement to the park. Introduction of these new species has removed the problem of animal imbalance in the park.

Game drives in Lake mburo national park are being enforced by the presence of the good transport networks that can connect the tourists coming to the park. They reach their destination of discovery in time,  and one of these is by road where visitors  get a chance to walk and get close and in touch with wild life since it is one of the best ways to explore the park. Horse riding is also one of the big activities that creates a bond between the visitors and the animals. Water transport know as boat cruises are also popular in the park where the tourists are taken on what is known as the motorboat trip. This gives one an opportunity to see hippos, even the keenest birder and all that being coupled together with the stunning scenery and panoramic landscape views will really impress you. The African beauty is unique and also during this ride visitors get a chance to view all types of birds flying in the air and also getting close to the wonderful crocodiles, aquatic birds, fishing and more.

Game drives in Lake mburo national park have rapidly developed and a new system was setup to improve on these games drives to make them unique and enjoyable. This lead to the introduction of the horse back safaris were tourists are given a chance to travel with in the park at the back of the most gorgeous horses in the park.

The horse back safaris are now available from mihingo lodge. These safaris are one of the exciting ways to see wildlife in and around the beautiful park of lake mburo without any engine sound or any destructive sound from the nearby towns and even without the deadly poisonous fumes. During this safaris one feels part of nature because even the shy eland come close to you this means that your now starting to become nature indirectly and even those more timid animals come towards you for example the zebra. When it gets closer to you, it gives you a chance to see the pure black and white stripes in it and also a chance of feeding it and showing it that you are of no harm to it and the rest of the nature.

Game drives in Lake mburo national park are also influenced by the  location of the park since it lies in the shadow area between Lake Victoria and mountain Ruwenzori. This has provided the park with good range of temperature changes that are in a range of 23 to 25 degrees Celsius an implication that all the drives can take place without any problem that can hinder the park‘s program and schedule. In turn, the presence of different network roads in the park has highly influenced one of the big activities to occur.

The pure blue 14 lakes with Lake Mburo the largest has highly influenced the game drive and boat cruise since these lakes harbor aquatic animals such as the crocodiles that are mostly seen on the shores of the lake making the game drive interesting and educative to the motives. The park is covering an area of 260 square kilometers thus making all the game drives possible to occur and also different Savannah features are covering the park for example shrubs, forested gorge which act as habitats to the wonderful wild animals in this park

Our customer support team is here to answer your questions. Ask us anything!
👋 Hello, I am here to help you
Chat with Us